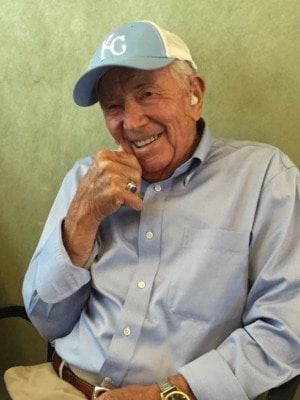 Richard Alden Montgomery, of Dadeville, Missouri, died peacefully on January 17, 2020, at the age of 91. He was born on January 31, 1928 to Elmer “Dick” and Inez (Cantrell) Montgomery. Richard retired from the Union Pacific Railroad in 1986 after working there for 34 years.

Preceding him in death was his beloved wife of 61 years, Hilda; his parents, Elmer and Inez Montgomery; brothers, Glyndon, Adren and Wayne; and his sister, Elnora Russell.

Richard served proudly in the Army during the Korean War and was stationed in Japan. He was promoted to the rank of Sergeant Major. When his tour was complete, he returned home to marry his sweetheart, Hilda Jones. They were married on December 24, 1952. They were married until Hilda passed away in November of 2015.
Richard worked for the Missouri Pacific Railroad until his retirement in 1986, by which time the Missouri Pacific had merged with the Union Pacific Railroad.
Richard and Hilda retired from Kansas City, Missouri, and moved back home to Dadeville, where they built their retirement home on the property where Richard was born. They enjoyed many years of retirement, filling their time with gardening, fishing, water skiing and spending time with family and friends.
Richard was a born again believer in his Lord and Savior, Jesus Christ. He was baptized at an early age and was a member of First Baptist Church of Raytown until he retired and transferred his membership to Dadeville Baptist Church. Richard and Hilda served faithfully there for many years in different volunteer capacities. His church family was dear to him.
One of Richard’s favorite pastimes was photography. We have enjoyed decades of photos taken by him. He really enjoyed taking pictures of different life events and sunsets and then gifting friends and family with the prints. He was frequently seen handing 8x10 prints to friends and family.

Funeral services were held on Wednesday, January 22, at 11 a.m. in the Dadeville Baptist Church. Burial followed in Bald Mound Cemetery. Family received friends on Wednesday at 10:30 a.m. until the service time in the church.
Memorial contributions may be made to the Friend - Divine Cemetery. Online condolences may be shared at www.greenfieldfuneralchapel.com. Services were under the care of Greenfield Funeral Chapel.

Lasater Gets 100th Win at Homecoming

Greenfield Gets Good Report from Auditors