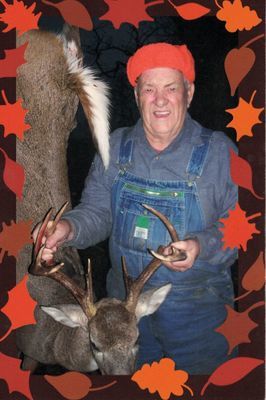 Paul Leo Clabough, of Everton, Missouri, passed away in peace on Monday, November 2, 2020, at the age of 87. He was surrounded by his loving wife, of 67 years, Leona, his children and other family members in the home he had lived in for over 60 years.

Paul enjoyed so many things in his life including: deer hunting, traveling to Alabama to visit family, spending time with his children and grandchildren, camping and swimming on Stockton Lake, and eating a McDonald’s biscuit on Saturdays while garage selling with his son, David.
He enjoyed watching old westerns and John Wayne was one of his favorite actors. He loved watching sports, as well as, umpiring baseball games and playing both fast pitch and slow pitch softball most of his youth and younger adult years.
Another joy for Paul was traveling with Bill Jones and Dwight Steeley to the area high school basketball games. One of his biggest joys later in life was spending time in his corner chair at Kenney’s Station. He loved being able to start the fire and make coffee before the others arrived and then always looked forward to whatever was for lunch, especially fried catfish.

Paul was known for his integrity and hard work ethic; for wearing his Liberty brand overalls; for helping his friends and neighbors anytime they needed help; for serving as pancake maker for the Easter sunrise service at Antioch Christian Church;for his contagious smile and laugh; and for being an overall honorable and good man. All who knew and loved him will sorely miss him, as he rests safely in the arms of his Savior!

Graveside services were held at 2 p.m. on Sunday, November 8, 2020, in Antioch Cemetery. Family and friends were welcome to view and pay their respects on Sunday from 10 a.m. to 1 p.m. in Greenfield Funeral Chapel.
In lieu of flowers, memorial contributions may be made to the Veterans Hospice Care or to the Antioch Cemetery. Online condolences may be shared at www.greenfieldfuneralchapel.com. Services were under the care of Greenfield Funeral Chapel.

Lockwood Aldermen and Mayor Sworn In