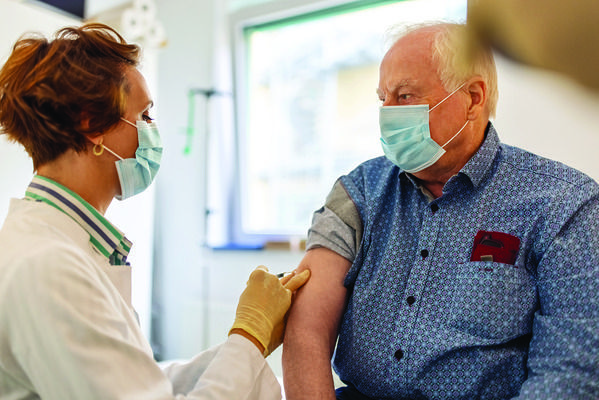 Residents of Dade County that had signed the waiting list awaiting distribution and meeting the state phase criteria were contacted a few at a time to give DCHD staff time to administer the shot and allow the patient to wait out the requirement 15 minute interval afterward with risking further exposure.

“We’ve been trying to do about 100 a day, 6 or so at a time,” said Pamela Allen, DCHD administrator.

Allen said that DCHD staff had contacted individuals on the waiting list the day before to schedule a time for their shot, and that there hadn’t really been any no-shows – with well over 1,000 persons on the waiting list, demand for the available vaccine remains high.

Allen said that the DCHD had held shot clinics on Monday, Thursday, Friday and Saturday of last week, and by the end of the day on Saturday had administered the first doses of the vaccine to around 400 persons. Dade County was able to receive the doses of the vaccine by working together with health authorities in Polk and Hickory counties, and is currently in line to receive supplies of vaccine from the labs of Pfizer and Moderna.

“Nobody is set up to do all 975 doses [the minimum order amount] in one day, so the three of us [counties] are sharing them as they come in,” Allen explained.

Administering the vaccine has required health department staff, and a few volunteers, to put in long hours, prepping the facility for patients beforehand and filling out reams of paperwork afterward.

“With lots of 80- and 90-year-old people coming through, it’s just trying to make it as easy on them as possible,” said Allen. “We’re doing our best to get our people in Dade County taken care of.”

In Lawrence County, the first 200 doses were already spoken for when they arrived on Wednesday, after the LCHD instituted a waiting list the week before.

““We know it’s confusing and frustrating to the public,” said Tana Bradshaw, an LCHD health educator. “We would love nothing more than to have thousands of doses to provide to our residents, but that’s just not realistic at the moment.”

In a statement, the LCHD said that the vaccine roll-out has been slow across the state, and that most health departments were still waiting on orders for the COVID-19 vaccine that had been placed as early as mid-December.

“We got notification on Monday that our December order was being delivered Wednesday (1-27-21), so we immediately activated our plan to start vaccinating two days later. We had only started a waiting list the Friday before, so we were thankful we had people to call. It’s not much, but it’s a start and we are extremely excited.” said Bradshaw.

While the LCHD said that it’s unknown when its next order of vaccine will be filled, Dade County was planning to have two COVID-19 vaccination shot clinics during the week of Feb. 1.

“There is no guarantee, every day information changes, so it makes it difficult to plan too far in advance,” said Bradshaw.

Health authorities are suggesting that anyone meeting the current phase criteria call their county health department to determine if they have a waiting list or an online registration. Area health systems, including CoxHealth and Mercy, have also begun online registration.

A description of the various phases and the tiers within the phases of the vaccine roll-out in Missouri is available at mostopscovid.com, along with more detailed information about the vaccine itself.

Sen. White on What Redistricting Means for Dade...