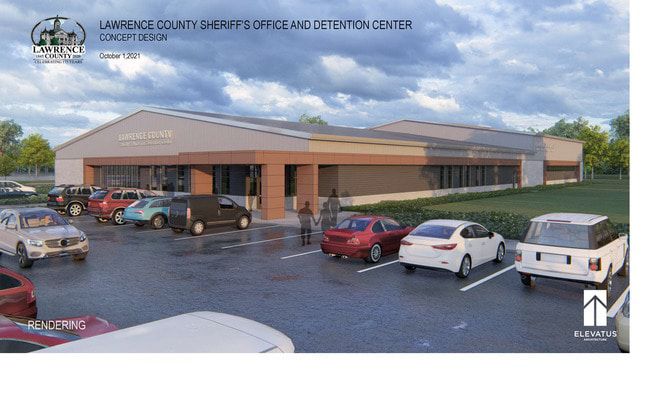 An artist's rendering of a new facility proposed to house offices and a new detention center for the Lawrence County Sheriff's Office. Construction of the facility would be funded via a proposed sales tax, up for vote on the Nov. 2, 2021 ballot in Lawrence County. (Image provided)

From the Lawrence County Commission

When Lawrence County voters go to the polls Nov. 2, they’ll decide whether the time is right to construct a new jail/sheriff’s office, funded by a 3/8-cent sales tax. After construction bonds are paid off, 1/8-cent of the sales tax will be retired. It requires a simple majority to pass.

A town hall on the issue will be held from 7 to 8 p.m. Thursday, Oct. 28, in the second floor courtroom of the Historic Courthouse.

While an earlier sales tax helps fund law enforcement operations, this one is for construction. A portion will be retained for maintenance and operations.

- Taxpayers will be spending close to a half million dollars to house prisoners in other counties this year - money that could have gone toward jail savings or other public safety needs.

- The county has obtained an 8.52-acre building site from the City of Mt. Vernon for a token dollar, so long as it shows progress toward the construction within three years and breaks ground within five. Otherwise the land goes back to the city.

- The possibility of using a portion of federal American Recovery Act funds.

- It would likely cost more to build in the future.

To date, the county has saved $873,000 for the jail construction; and the building site is valued at over $120,000. Combined, those bring the county $1 million closer to a new jail/sheriff’s office. The sales tax is expected to generate roughly $1.2 million annually during the period it is at its full 3/8-cent level.

The amount of revenue available, combined with construction and operating costs, determine the size of the project. The county expects to be able to fund a 120-bed facility, which would more than double the capacity of the existing 52-bed jail. Total project cost could run $15-18 million.

It is working with a seasoned jail architectural firm, Elevatus Architects, to design a structure that can be more easily expanded as needs and finances allow. The building site should be able to accommodate two future 96-bed expansions.

It would be constructed within a new development area south of I-44 to be known as Mt. Vernon Commercial Park South. Initial access would be from Missouri Drive off the south outer road.

A 3/8-cent sales tax would add just over a third of a cent to the cost of a dollar candy bar. For $20 worth of supplies at a store, it would add seven and a half cents.

An information sheet on the project can be found at www.lawrencecountymo.org.

Voters may cast absentee ballots in person at the county clerk’s office at the Historic Courthouse from 8 a.m. to 4 p.m. weekdays and 8 a.m. to noon Saturday, Oct. 30. Last day to vote absentee in person is Monday, Nov. 1. On election day Tuesday, Nov. 2, polls will be open 6 a.m. to 7 p.m.