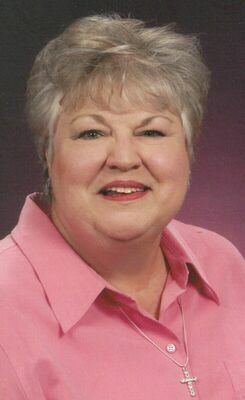 Linda Lee Wilson was born to John Kenneth Wilson and Mary Faye Dodd Wilson on May 15, 1938, on the Fruin family homestead, 3 ½ miles north of Greenfield, Missouri. The oldest of four children, she began first grade at the one-room Liberty School northeast of Lockwood. While in second grade, the family moved to Lindsay, California, for a short time. They returned to the farm northeast of Lockwood and she finished grades three to six at Liberty. In 1950, her parents bought a corner market in Visalia, California, where she attended grades 7 to 10. In 1954, the Wilsons returned to Dade County and Linda went to Lockwood High School, graduating in May 1956.

In December 1956, Linda married Dwaine Schilling. After he was drafted into the Army, they lived in San Antonio, Texas, where their first child was born. Released from the Army, they eventually made their home south of Lockwood, Missouri, and two more children were born. They divorced in the 1990’s.

At age nine, Linda was baptized into Christ’s death and resurrection at Sons Creek and she continued to grow in faith. In 1957, she became a communicant member of Zion Lutheran Church, Meinert, Missouri. Then, from 1969 until her passing, she was an active member of Immanuel Lutheran Church, Lockwood, Missouri.

Linda worked at several places starting at Rubenstein’s in Greenfield and including the Lockwood R-l School cafeterias, D & S Variety, OTASCO, and S&H Farm Supply. In 1982, Farmer’s State Bank offered her a job and she began a career in banking that lasted for 24 years until she retired in 2006 having worked in the same bank building but under five different bank names! As retirement neared, she also ran 3rd Street Specialties, a gift store, from her home.

Linda was active in the Lutheran Women’s Missionary League, the Lockwood P&BW, and in the 1970’s served as a Girl Scout Leader and a 4-H Leader. She was one of the parental chaperones for the 1976 Salute to America Singers that toured Romania. During the Wars in Iraq and Afghanistan, she coordinated the shipping of handmade quilts from Dade County quilters to wounded troops at the U.S. military hospital in Landstuhl, Germany. She served for over a decade on the board for Good Shepherd Care and Rehab in Lockwood.

On Monday, January 3, 2022, at age of 83, while in hospice care for congestive heart failure at Good Shepherd Care and Rehab in Lockwood, Missouri, the Lord ended Linda’s struggle and delivered her safe to His home.

Visitation was held at the Lockwood Funeral Chapel on Thursday, 6 January, from 2 to 7 p.m. Funeral services were held on Friday, January 7, 1:30 p.m., at Immanuel Lutheran Church, Lockwood, Missouri, followed by burial near her parents in the Lockwood Cemetery.

Linda is preceded in death by her parents, John and Faye Wilson; and brother-in-law, Larry Cascone. She is survived by her daughter, Valerie (Troy) Hudspeth, of Lockwood; son, David of Brighton, Colorado, and son, Darren (Doug) of Idyllwild, California. She is also survived by four grandchildren: Andrew Hudspeth of Lockwood; Jason (Henry) Hudspeth; Jarica (Phil) Oeltjen of Mt. Vernon, Missouri; and Brooke (Ryan) Schafer of Plano, Texas; and one great-grandson, Chase Oeltjen.
She is also survived by her sisters Carol Wilson of Anniston, Alabama, and Jeanne Cascone of Kansas City, Missouri; and her brother, John D. (Jana) Wilson of Aurora, Missouri; and many nieces, nephews, and cousins.