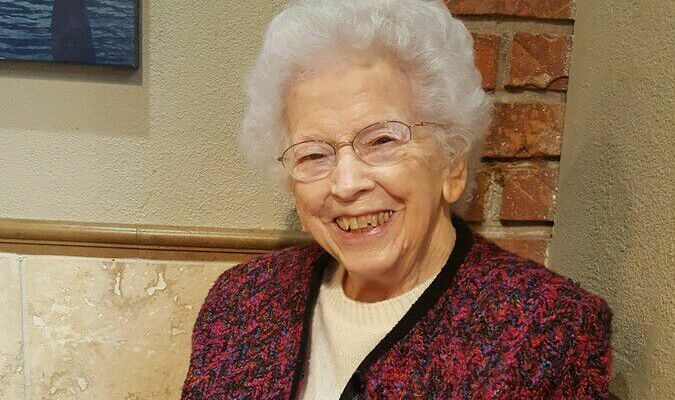 Leila Alma (Wendt) Spicer of Everton, Missouri departed this life at 3:08 p.m. on Sunday, December 26, 2021 at the age of 101 years old.
She was born on August 24, 1920 in Harvard, Nebraska, to Herman August Wendt and Amanda Marie (Schuster) Wendt.
Leila was a 1937 graduate of Harvard High School in Harvard, Nebraska and attended business college in Hastings, Nebraska. She worked in the War Department in Washington D.C. during World War II where her work included taking dictation and typing Executive Orders from the staff of President Franklin D. Roosevelt. She also met Eleanor Roosevelt at a hair salon that they both frequented.
During her time in Washington D. C., Leila and her fellow secretaries would take the train to New York City where she saw famous actors and singers in Broadway performances, including Oklahoma, South Pacific, and Carousel.
Following World War II, Leila worked for Federal Civil Service in Denver, Colorado, where she met and married Wilson C. Spicer. After moving 23 times in ten years with her husband, an oil exploration engineer with Carter Oil Company, Leila became a homemaker in Avon, Indiana upon Wilson’s employment in the Allison Division of General Motors in Indianapolis, Indiana.
Leila and her husband raised three children in Indiana. She was very involved in their school activities and sports programs. While in Indiana, Wilson and Leila started Avon Realty, a successful real estate brokerage.
Leila spent several years in Prescott, Arizona, in retirement with her husband. Before moving to Everton, Leila enjoyed traveling to Hawaii, Alaska, several countries in Europe, and driving across Canada to Nova Scotia.
Leila attended the Ash Grove United Methodist-Presbyterian Church and participated in the women’s group activities. She also enjoyed activities and luncheons with a local Red Hat Society chapter and was a member of the Tri-Lakes General Motors Retirees Club.
Leila was always ready to lend help to others and thoroughly enjoyed visiting with people to learn about their lives and families.
Leila remained active throughout her life from visiting festivals, museums, theme parks, national and historic sites, and attending music and theater performances to feeding the wild birds in winter and helping with farm chores.
Leila is survived by a daughter, Cheryl (Spicer) Akers of Everton, Missouri; one son, Richard Spicer of Stanwood, Washington; and one sister, Doris (Wendt) Dye of Omaha, Nebraska.

A memorial service will be held at a later date.