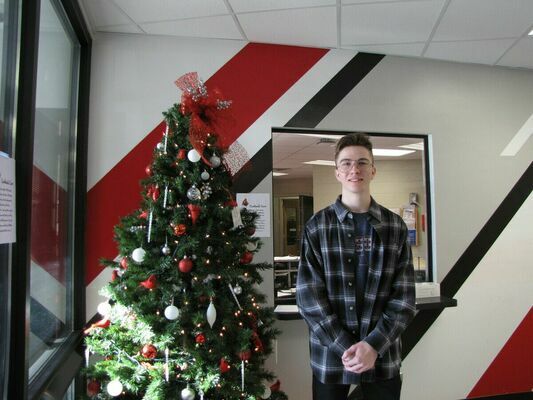 Daniil Rakov is a native of Ukraine attending Miller High School as an exchange student during the 2021-21 school year. (Photo by James McNary)

Today I want to share with you the origins of the famous “Carol of the Bells,” explain what one of people’s favorite Christmas songs has to do with Ukraine and its culture, and talk about my own experience in hearing two different versions of the song and its distinctive meanings to our two countries.

First things first, it’s important to know that the Carol of The Bells is not the original version of the song, but rather an anglicized version with a new set of lyrics written and arranged by an American composer Peter Wilhousky. Wilhousky, in turn, took the melody and the original song called Shchedryk as his idea, and Shchedryk is the Ukrainian song written in Winter of 1916 by a Ukrainian composer Mykola Leontovich. As such, Carol of The Bells you and I know has different lyrics and meaning, but its catchy jingle remained the same as the one of Shchedryk. That’s why if you choose to listen to the original Ukrainian song, you will immediately recognize our beloved Christmas song.

Leontovich found his inspiration for the composition from the events that took place during those times. Specifically, those were the years of the World War I : Ukraine was divided between the Russian and Austro-Hungarian Empires, and the War caused the death of 1.5 million Ukrainians, who fought on both sides. As such, Leontovich composed “Shchedryk” with an aim to create a sense of hope for better times in the Spring. The original lyrics describe a swallow that flies into somebody’s yard, calls out for its master, and sings about the wealth they will have the time Spring comes – healthy livestock, money and a beautiful wife. Swallow is the symbol of Spring because it is one of the main birds in Ukraine that migrates before cold times and comes back when it gets warmer. Hence the name for the song fits it very well: the word Shchedryk comes from the word “shchedryj” that means bountiful or generous.

The popularity of the song grew exponentially and although no changes to it were introduced the song slowly evolved into becoming a Christmas Carol. People in Ukraine go door-to-door caroling this song to their friends, neighbors, and even strangers to wish them a good fortune and, in turn, receive treats, food, and other nice rewards. That’s why both Shchedryk and Carol of The Bells may both be considered as Christmas carols now.

What was it for me to know Shchedryk back in Ukraine and then hear Carol of The Bells played here at my American home? It meant for me that no matter where you come from and end up at, there’ll be this holiday jingle that unites people and makes any place feel more familiar to their home. It also created for me a sense of pride to know that there’s a speck of Ukrainian culture that influences the world every Christmas. Just as the saying goes, the world is small: we can’t even imagine how close other cultures, traditions, and countries may be to our daily lives.

Sen. White on What Redistricting Means for Dade...