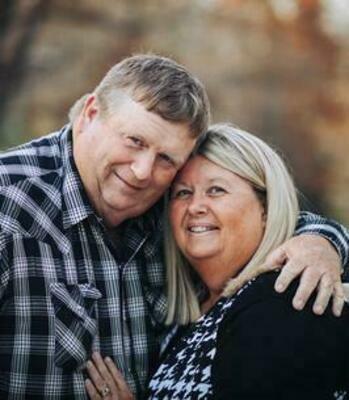 John Stephen Kenney was born in Lockwood, Missouri on April 8, 1958 to John Marvin and Jo Ann Vance Kenney. Steve went home to be with the Lord on March 5, 2022 after a short illness at the age of 63.
Steve lived all his life in Cane Hill and attended school in Stockton. High school is where he met his wife of 44 years, Kimberly Ann Williams. They were united in marriage on June 3, 1977. They had two daughters, Jennifer Marie and Melissa Gail.

Steve grew up working with his dad, Johnny, custom harvesting and working at Cane Hill Lumber. Steve truly loved farming though and it was a family business. He row cropped for many years with his father-in-law, Gail Willams and his dad, Lester Williams. He also raised hogs and cattle along with Kim who was always there doing her share. When the girls came along, they helped out, too. Steve never told his girls they couldn’t do something because “they’re just a girl”. As long as he felt they were safe, he supported and taught them. At times they weren’t sure but “stood their ground” pretty darn good.

Eventually Steve focused on raising beef cattle. He met many people working for the stockyards and then just attending the sales to buy calves. Many people started asking him to buy for them as well.

The family started to grow when grandson Austin arrived. Steve will forever be proud of him. They had a very special bond even more so after the passing of Austin’s father. Austin worked with Grandpa Steve haying and feeding cattle. The two of them would pack up and go fishing on Truman every summer where they made many memories. Two granddaughters were inherited as well.
Softball and basketball games came with that addition. Neelly and Harlly were never anything but grandkids, the word step wasn’t in Steve’s heart. When Harlly took an interest in the farm, Steve loved it. Then arrived John Rowdy. Rowdy was the apple of Steve’s eye. Anytime you saw them together, you could tell what they had was unique. Forever they will be fishin’ buddies. Rowdy will be hearing stories about his Papa Steve all his life.

Steve hunted and fished his whole life. He coon hunted and fished with his Paw Paw Claude Vance at a young age. Later, it was bird hunting with the Cane Hill boys after school. Steve loved to turkey hunt and really liked calling in turkeys for his daughter, Jennifer, Austin and friends. He loved fishing on Stockton Lake, guiding when he was in high school. He would always take his girls fishing when the crappie and white bass were biting good. In later years, he enjoyed going to Truman Lake to jug for white cat and crappie fish. You may have seen his Facebook live videos of him and the crew landing a few jugs. It was surprising to see how he embraced Facebook. He always said it was like the CB radio of today. We have enjoyed many entertaining conversations between him and his friends.

Steve and Kim always had Foxtrotting horses. He loved watching a good Foxtrotter go. He was involved in showing them, too. There were many memories made taking daughter, Melissa and later grandson, Austin to shows.

Steve was preceded in death by his parents, Johnny and Jo Ann, and son-in-law, Ricky Crews.

Dad always had a saying for when we suffered loss on the farm. He would say it’s better in the barn than in the home. Right now, we would take a hard hit in the barn if we could have kept you around a lot longer. Love you, dad.

Arrangements were under the care and direction of Bland-Brumback Funeral Home, Stockton, Missouri.