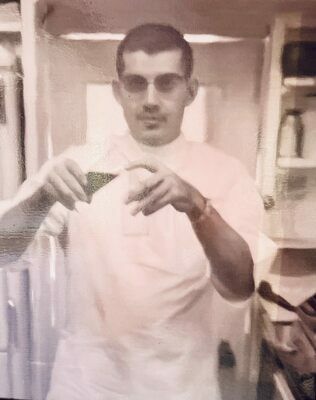 Orvel Lee Cooper, age 86, of El Dorado Springs, went to Heaven on Monday, July 25, 2022. Orvel was born on December 15, 1935, in Picher, Oklahoma, to Harvey and Jessie (Webb) Cooper. He graduated from Webb City High School in 1953 and earned a Bachelor of Science Degree of Pharmacy from the University of Missouri - Kansas City in 1959. He received his license to practice pharmacy from the Missouri Board of Pharmacy on February 25, 1959.
Orvel married Donna Mae Beisner on January 26th, 1958. They celebrated their 61st wedding anniversary before Donna’s passing in 2019. Orvel and Donna moved to El Dorado Springs where Orvel opened Cooper’s Pharmacy, marking the first of many business ventures they embarked upon together. Orvel also served his community as the mayor of El Dorado Springs for several years. He was proud to have been the mayor during the El Dorado Springs Centennial in 1981. He retired as owner of the Lockwood Pharmacy in 2020. He was a practicing pharmacist in the state of Missouri for over 60 years.
When he wasn’t behind the pharmacy counter six days a week, he enjoyed all aspects of the great outdoors, especially hunting and fishing. Orvel enjoyed studying the history of the westward expansion of our country and he made many trips “out west” with family and friends.
Known to his family as “Dad” and “Pappy”, Orvel enjoyed cheering on his children and grandchildren at their school events, telling them stories which may or may not have been slightly embellished, and always supporting the dreams they chose to pursue. These were just a few of the ways that Orvel displayed his unconditional love for his children and grandchildren.
Preceding Orvel in death were his wife Donna; his parents, Harvey and Jessie Cooper; his in-laws, Don and Juanita Beisner; his sister-in-law, Sharon Cooper; son-in-law, James Callaway; and daughter, Ann, who died in infancy.

A one-time scholarship for a graduating member of El Dorado Springs Class of 2023 who plans a career in health care... “Orvel Cooper Memorial Scholarship”

Contributions to Missouri Department of Conservation in memory of Orval Cooper. https://mdc.mo.gov/sites/default/files/2020-04/DonationForm.pdf

Services are under the care and direction of Bland-Hackleman Funeral Home, El Dorado Springs, Missouri.